Japfa kept at ‘buy’ by DBS with $1.10 target after KKR investment 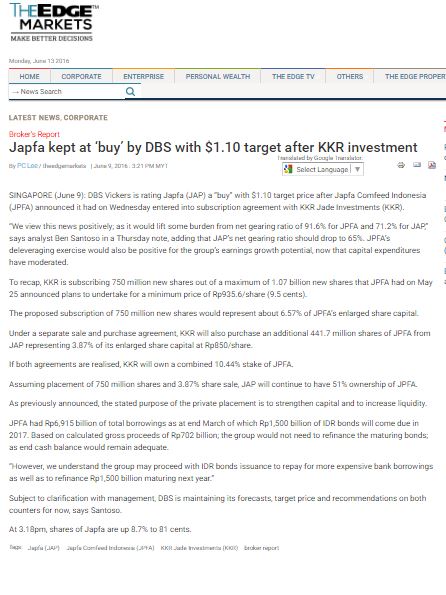 “We view this news positively; as it would lift some burden from net gearing ratio of 91.6% for JPFA and 71.2% for JAP,” says analyst Ben Santoso in a Thursday note, adding that JAP’s net gearing ratio should drop to 65%.

JPFA’s deleveraging exercise would also be positive for the group’s earnings growth potential, now that capital expenditures have moderated.
To recap, KKR is subscribing 750 million new shares out of a maximum of 1.07 billion new shares that JPFA had on May 25 announced plans to undertake for a minimum price of Rp935.6/share (9.5 cents).
The proposed subscription of 750 million new shares would represent about 6.57% of JPFA’s enlarged share capital.
Under a separate sale and purchase agreement, KKR will also purchase an additional 441.7 million shares of JPFA from JAP representing 3.87% of its enlarged share capital at Rp850/share.
If both agreements are realised, KKR will own a combined 10.44% stake of JPFA.
Assuming placement of 750 million shares and 3.87% share sale, JAP will continue to have 51% ownership of JPFA.

As previously announced, the stated purpose of the private placement is to strengthen capital and to increase liquidity.
JPFA had Rp6,915 billion of total borrowings as at end March of which Rp1,500 billion of IDR bonds will come due in 2017. Based on calculated gross proceeds of Rp702 billion; the group would not need to refinance the maturing bonds; as end cash balance would remain adequate.
“However, we understand the group may proceed with IDR bonds issuance to repay for more expensive bank borrowings as well as to refinance Rp1,500 billion maturing next year.”
Subject to clarification with management, DBS is maintaining its forecasts, target price and recommendations on both counters for now, says Santoso.
At 3.18pm, shares of Japfa are up 8.7% to 81 cents.